Part three – A match is made 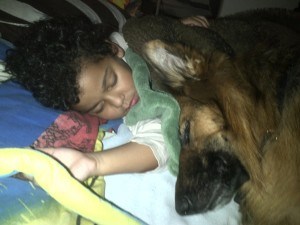 Showing up at Andy’s home was exciting.  I was to learn from Marie Therese that Andy had just about lost his life; that while in hospital being treated for anaphylaxis, Andy had a ‘knowing’.  A discussion ensued and a decision was made that was changing all our lives…

The change of my life had silently begun, the Krzus family and my entourage including Hunter headed out into the back acreage to visit and I was to learn of a selfless gift of love.

Hunter was placed in an large outside run beside the children’s play set that the younger children were playing on.  My eldest daughter supervised so I could focus on my conversation with Andy and Marie Therese .  On the ground lay Lutz, a beast of a male German Shepherd.  Within feet of Lutz lay Cora, a female German Shepherd, much more slender than her companion. Between the dogs sat Peter, the youngest of the Krzus’ children at just a year of age.   Peter had a wood stick in his hand twisting it and scratching in the earth.  The dogs were content to allow Peter to play with the coveted stick.
Andy spoke about Kai’s specific needs related to his Autism that I had expressed on our initial consultation.  Andy had grasped the areas of concern for Kai and he was prepared to show me what a trained service dog could do. As much as Clara the eldest wanted to join in with us but gracefully  kept Kai entertained so we could see what Cora offered. Annie, at four, is an old soul and the middle child.  Far more mature than her years Annie joined us to show how she and Cora worked together. Cora stood and came on command.  A leash was attached and Annie walked with Cora in a heel from where we stood to across the expanse of the upper yard never pulling or out of step with Annie.  At that point Annie had Cora ‘place’ and she went up onto an inverted milk crate.  Next Annie walked tethered to Cora showing how Cora was comfortable with the child attached to her and able to walk as a team.  Then Cora was put in a down-stay while still tethered to Annie.  Andy had Annie try with all her might to pull from Cora, encourage Cora, all without Cora responding beyond her last command of down-stay.  Andy then asked Cora to back up and she easily pulled Annie from her position; Cora had the strength to move or hold a child in a position.

Moving on, Andy had Kai go hide in the lower yard without Cora knowing where.  Andy gave the command and Cora was off like a shot and soon alerted she had found him by eye contacting Andy, barking, and then returned to her ‘find’ for verification of location until the handler had appeared.  This ‘game’ was repeated three times while Andy explained how Cora worked and what I was to look for in her body language and actions.

The discussion turned to an offer of a lifetime… Cora was being offered to Kai for service.  Much more discussions and planning followed in the next days – we had young children being deeply affected by the decision of Cora going back to work but having to leave her family home and those that loved her. Kai was also having his new black puppy going to then live with Andy and continue his training as a specialized support dog. We still had to see if this new idea was going to work.
Andy and Cora came for a home visit and we spent the time hiding Kai in his scent filled home and releasing Cora to find Kai.  This was important to me as Kai often hid when upset or embarrassed and would not reply from the hiding spot.  The house is not super large but when Kai hid, and sometimes went to sleep in a shut down from his external environment, he was like finding a needle in a  haystack. Cora repeatedly, with rapid speed easily tracked Kai and alerted us upon finding him.  Cora was eager to continue to participate in what she had been qualified and trained to do.  The difference for Cora was the house terrain was kind to her hips.  Her new job was exactly what she was able to use her skills for and would give her the love and quality of life that she deserved.
The last Sunday in August Andy and the girls came to my home with Cora. We met out on the front lawn to do the exchange which had been explained as a sleepover in case for unforeseen reasons it was not to work out… They would take Hunter and we would keep Cora.  We tried to keep goodbyes short and respectful.