Part one – A mother’s plea! 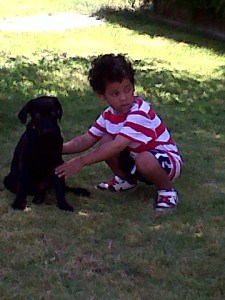 When I first had counted my sons ten fingers and ten toes I saw his life ahead as perfect as his new born self could be.  I had no idea that on May 17th 2013, the day before his fifth birthday, I would be sitting in a room getting my son’s diagnosis of Autism.

Kai had been developing as expected.  I have two teenage daughters so I was aware of the stages of development.  Without debate I say after vaccinations Kai regressed.  Kai at 4 1/2 years of age had become almost non verbal and not testable due to his limited ability to communicate.  Kai was uncomfortable with light, sounds, smells, people, touch, food, the list knew no boundaries when it came to altering our lives.  Basic, simple tasks like going into a bank became a dreaded screaming, crying melt down. Sometimes I joined Kai in the sadness and frustration that had enveloped us.

I began to isolate Kai from the stimulus that caused him distress.  It is hard to live in a world that seems to assault your child’s senses, not to mention the adults who seemed to feel they had the right to approach Kai to tell him he was a bit old to be ‘misbehaving’.  Unfortunately, even in the home, frustration was a daily occurence due to Kai’s inability to verbally express his needs.

Kai also had a common characteristic found in children diagnosed with Autism, bolting.  One minute Kai would be at your side or focused on something and then, shazzam, he was gone.  Kai was unable to grasp danger so being outside when he bolted put him in danger of injury or death.  The unimaginable stress in keeping Kai safe wherever we were is beyond description.  At five years of age we still had Kai between us through the night so we could sleep with only one eye open.

Potty training was an on going transition that Kai was not grasping.  I watched Autism friendly potty training videos with him to encourage development.  We used books to read on the subject, and had pcs (pictures printed out and laminated) showing the steps to going potty with no progress.

Back at the diagnosis meeting, preparing myself for the outcome and the fear of the unknown future for my son was overwhelming.  I was determined to do what it took to help my son stay safe and be able to communicate.  The diagnosing pediatrician, psychologist, speech therapist had compiled a report along with recommendation of needed services to aide Kai in his development going forward.   The report is acronymed BCAAN.  I now had in my hand Kai’s guidelines to implement, specific to Kai, detailed in point form to follow.

Autism support dog?! What the heck was that?  The pediatrician explained I could help Kai by seeking out a support dog to help with his safety and development.  I had never heard of this service, I was also made aware that no financial support was available in attaining the dog and that they were as costly as buying a new vehicle.  I was determined to do my best…. so off I went to be super mom.

I began in my home province of British Columbia to seek out a specialty trained dog for Kai.  It didn’t take long to learn that I would be required to wait an average of two years to be able to even be put on a wait list to acquire this unique dog.  Being the super mom I began a Canada wide search for companies who may have been able to help me keep Kai safe now with a service dog.

By mid April I concluded I had one choice, to purchase a pup and have it privately trained to serve Kai’s specific needs.  I had received advice on some specifics in choosing a dog as in a male, to handle Kai’s growing strength, of good temperament for the challenges it would face in the erratic behaviour my son could display. Hunter… a black male purebred Lab puppy held all my hopes.  He was purchased from a breeder in Chilliwack and came home with my highest expectations and dreams.  Kai was instantly attached to Hunter and began to communicate to people about his dog.  Kai began to speak to strangers, ‘I Kai, my Hunter black’. Kai began to socialize about his dog wherever we were…. completely beyond our expectations or hopes.  This dog began to teach Kai about things we had been unable to connect for him.  I was soon to learn how Hunter coming into our home was going to open Kai to possibilities we had been unable to provide.
July opened the public outdoor pool and we began to try to get Kai into water… sensory issues made this more than uncomfortable for him. It took weeks to get Kai open to the daily pool time.  One of our trips to the pool ended with Kai standing on a picnic table, wet and cold,  just out of the water and having to pee.  Kai normally would wait until his diaper was on to urinate but Hunter changed that, as Kai asked if he could pee on the grass like he had seen his new friend doing.  I was thrilled and encouraged Kai to ‘go’ and for the first time Kai actually saw himself go, just like his puppy.  The road of potty training had not been solved but I now had hope.
Mid August I decided to contact dog trainers to discuss my needs for Hunter and the costs that would be involved.  We are a single income family as Kai was and is a full time occupation for me.  The financial road ahead investing in Hunter was unknown.  My second call on the dog trainer search had me speaking to Marie Therese, the wife of Andy Krzus, Obedience Unleashed Dog Training’s owner and trainer.  Marie assured me I would not be wasting Andy’s time, he would be happy to meet with me at no charge, to bring Kai and Hunter and we would go over my needs in training Hunter for Kai.

Andy was attentive to my story and my needs for Hunter’s training.  I needed Hunter to be able to be comfortable tethered to Kai to keep from situations of bolting.  I was also hoping to train the pup to be able to ‘find’ or track Kai as Kai often hid when he felt embarrased or confused; on more than one occasion Kai hid himself within the house and fell asleep, while I frantically searched for him. Hunter was being counted on to assist in finding Kai and save me from tethering myself to my son. I lived in a constant state of fear.  Showering, going to the bathroom were all at the risk of Kai being placed in danger of taking off.  Andy and I had agreed to allow him a few days to formulate a plan and financial package for the training I requested.  I left Andy on a Friday with my email address and my hope in his hands with his assurance he would get back to me within a few days.

Days passed and no word. I began to conclude Andy was not interested in the training of Hunter.  By the end of the week my heart was heavy with the prospect of beginning the search for another trainer when my phone rang.  Andy was calling!  I listened waiting to hear him bow out gracefully; instead Andy informed me he had three completely different scenarios to run by me and could I come to his home.  I excitedly got Kai ready to go meet Andy.  I had enlisted my oldest daughter to join us and we brought Hunter along to learn our fate.
To be continued …