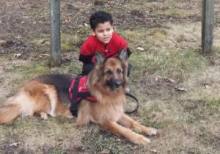 months ago Cora came into our lives and everything changed.

My son Kai has autism. For each child diagnosed with that title the journey then begins.

I reread my posting on www.autismservicedogsbc.com a few weeks ago and began crying as I read it aloud to a friend. The emotions and forgotten memories came flooding back. Kai is so far from the lost boy he was when I began to find a service dog for him.

Kai was non-verbal. He would bite himself, cause himself to vomit (mostly in my vehicle while I drove), hurt himself by hitting his body, cry or scream for hours and be inconsolable or just completely shut down.

I spent many days standing outside the bank while Kai cried and refused to enter … to end with me leaving in tears myself without getting the banking done. Public outtings were limited with the expectation of not being able to stay long wherever we were off to.

Kai had on many occasions bolted. Kai either ran and hid and completely shut down or would go into hysteria and uncontrolled misery which escalated to harming himself. I was locked into this world of his with him … as were his two older sisters. The safety and Kai’s well-being became all our concern.

Kai’s processing disorder had him bothered by light, sound, touch, taste, and smell. His senses were overloaded causing him discomfort at levels that were ‘normal’ in our world. The sensory overload made our ‘world’ confining to keep Kai at peace. We could not go to the beach at all. Public places risked Kai going into a complete overload and bolting off or in hysteria until he was so upset he would vomit.

Even our home was isolating and not safe for Kai as you could not leave him alone for a moment. Rereading how my life was with sleep depravation and the fear of Kai getting out of the house if I slept or even went into the washroom brought back the physical chest tightening fear and overwhelmed state I had previously constantly lived in, and I had forgotten.

From diagnosis, to failing to find a service dog, to purchasing a lab puppy to be trained for service of Kai … to the story of Andy Krzus and Cora coming into our lives – the new Life began … a Life of living …

I think when a door swings open and fresh air and light comes flooding in you instinctively run forward to not look back at the stifling cage that had contained you. I believe that the night Cora jumped up on my bed and licked Kai’s face to then lay upon his feet was the night that the dawn of living began for myself and the children.

Our adventures to places most of us take for granted was exciting. I began feeling safe taking Kai to public places. For Kai, he began to be able to stay calm and not overload. It wasn’t a magic pill but a bond of friendship with Cora and a sense of responsibility for Kai with his dog that seemed to bypass the walls of autism processing difficulty that I had no chance at reaching prior to Cora’s arrival.

Kai has gone from completely non-verbal to introducing Cora to everyone we meet. Kai takes pride in telling those whom we come in contact with all about Cora and her unique training in tracking him … that they play hide and seek. This ability of Cora’s training is unique to ASD-BCA service dogs and a need I had for the safety of Kai as he was well known to hide and be unresponsive when calling to him. So now it is a family game to have Cora search out Kai within the home to keep her ability and to keep Kai laying scent pads for her. We also practice outside with Andy and Kai within our community.

Tracking was a key point for Cora’s gift to us and I was fortunate to be able to take winter tracking outside with Obedience Unleashed so I could learn how to lay a course and work with Cora to track items I had scented from Kai. As a single parent, the role and responsibilities of raising a child with autism has challenges that go beyond most of a parents abilities. I have been blessed to have the community support in educating and offering services to allow me to grow as my son grows.

As Cora’s licensed handler I am responsible within our travels out in the community to ensure the public we come in contact with understand the importance of an autism service dog. That every animal owner that brings their dog out in public has a responsibility to keep them behaving in a respectful manner to those they come in contact with.

I am out in public with Cora to keep my son safe and at peace. When a dog attacks or interferes with my son and his service dog as happened last week in our local Royal bank, this puts my son’s safety and well being at risk.

Cora has reached Kai and offered an opening to allow him to grow in sensory stimuli. Kai enjoys rubbing his face in her fur, playing search games, talking to her, feeding Cora and introducing Cora with strangers. These are all areas of growth for Kai. We no longer use weighted occupational therapy devices. Once Cora began sleeping with Kai he was able to have his weighted dragon removed and Cora became the grounding force to facilitate calmness and assist to maintain sleep through the night.

Our world has been continually expanding since Cora came into our lives and home. Cora is more than any of us could have imagined in serving Kai. Kai’s growth with Cora has been a miracle. As I posted on Facebook for Kai, love needs no words as you can see from the photo.

I appreciate each day Cora is with us. I am looking forward to this summer out in public places and experiences for Kai with Cora. Say ‘hi’ if you see us, we appreciate the community support and awareness for our children in the acceptance of our unique differences.